I started uploading flying videos on YouTube in 2014, as a way to share my travels and adventures with my friends and family.

There was little post-production, little thought, and the videos were long and somewhat boring. I soon realised there was a market for UK-based pilot YouTubers, and thought I could put my TV production experience to good use.

The Flying Reporter, as the channel is now known, was launched in December 2015.

My original vision for the channel was to combine my journalistic skill, and my private pilot license to go on journeys exploring sights and places of interest, and interviewing interesting people who would join me in the cockpit of my PA28 share-o-plane.  While I firmly believe in this concept, the idea has never been fully realised.  I need to work to pay for my flying, and that combined with being a parent leaves me little time to research and produce the content.  Instead, I’ve focussed on recording and sharing my flying adventures, with the occasional special feature.  As the channel grows, I hope to realise the potential of the original vision. 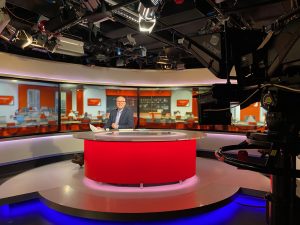 I started my career in local radio in the late 80s after spinning disks on Chichester Hospital Radio as a teenager.  I transferred into regional TV in 2001.

From 2007 I worked for approximately three years producing and directing features for a prime-time network TV consumer programme, before returning back to regional TV news.  In my day job, I’m a video journalist, which means I research, write, film, edit and present the news, both live and in pre-recorded reports. I qualified as a private pilot in June 2013 after about 18 months of training, and sitting a series of exams.  I trained in a Cessna 152 two seater plane flying from Biggin Hill Airport, just to the south of London.  I now fly a PA28, a 4 seater single engine plane.

Recent trips have taken me across the UK, and into France, Italy, Croatia, Austria and Germany.  I hold a restricted instrument rating and night rating.

My husband an I are adoptive parents to a 12 year old boy.